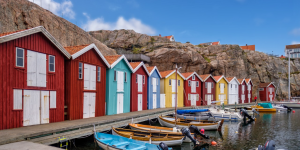 Most of the people in the Scandinavian countries have kept their job, but reduced their spending during the pandemic of COVID-19, shows study about the financial condition of the households. It is a paradox that the worst recession of this century has led to a better welfare for the majority of the households, noted in the conclusion of Nordic Debt Collection Report, which covers the period from the beginning of 2020 to February this year.

Features of the COVID-crisis

Change in the behaviour of both the clients and lenders has led to a fewer debt collection cases. It seems counterintuitive that payment problems decrease at the same time as economic activity rapidly declines and the unemployment rises. The key factors for short term reduction of credit losses are changes in consumption behaviors, debt moratorium, as well as wide government support for the economy in all Scandinavian countries – Sweden, Norway, Finland and Denmark.

According to data of the European Banking Authority (EBA) in the period from March to December 2020 only Denmark and Norway recorded an increase in NPL’s, but it is close to zero – by 0.1 percent points for both countries. In Sweden and Finland there’s no change (see the chart below). The level of NPLs in North Europe is traditionally lower than the average in the European Union, which is 2.6% at the end of 2020. For example – NPL’s in Bulgaria are 7%, and it is higher only in Greece and Cyprus.

There are two main reasons for the situation in Scandinavia, according to data from the research. Firstly, payment holidays were offered on relatively large loans, such as housing, credit cards and auto loans. Second, many creditors temporarily stopped sending smaller unpaid bills to debt collection. An increase in smaller debt collection claims during 2021 therefore currently looks like the most likely scenario. An increase in credit losses among high income households currently looks unlikely.

High unemployment has not had an immediate effect on credit losses among households, as the income reduction is more gradual than previous economic downturns. According to a survey, conducted in the autumn of 2020, more than 10% of Nordic households arranged a payment holiday if they experienced an income reduction.

In the last 12 month in all Nordic countries unemployment has risen. Accommodation and restaurants, which were particularly locked, are impacted by reduced mobility and social distancing. It makes up a relatively small share of the economies in the Nordics. The reason is related to their small shares in the GDP, as opposed to other European regions, such as the Southern countries.

In the North part of Europe households with low income typically have less debt. At the same time lower interest rates increase disposable income relatively more for high-income households, but it is difficult to boost demand at the same time as mobility is restricted, which leads to increased saving rates.

Higher house prices increase demand for mortgages and credit growth for housing loans has increased across the Nordic region during the pandemic. It also represents a shift in credit flows  away from lower-income households to higher-income households. One of the main changes during the period is the acceleration of economic inequality between different consumer groups.

For example, people, who live alone and have low income, are affected by income losses and unemployment, as a result of the restrictions because of COVID-19. On the other hand are people who have been able to keep their jobs and work from home. They have found themselves having better financial margins than before the outbreak of the pandemic.  In higher-income groups, restrictions on the possibility to consume have resulted in increased savings rates.

The outbreak of the corona virus set off the worst economic recession since World war II. This has also led to an unprecedented government support for more than 70 years to limit credit losses among both businesses and households. For now, the low level of NPL’s is accepted as proof that the measures have worked. Credit losses and bankruptcies normally negatively correlated with economic growth, but in 2020 the number of bankruptcies in Nordic countries declined. An unprecedented level of public sector spending, state-guaranteed liquidity, lower interest rates, regulations, payment holidays, and indirect restrictions on spending have prevented short-term credit losses. Long-term costs of subsidising businesses normally outweigh short-term benefits and when the support stops, NPL’s rise.